Our home is in a subdivision regulated by bylaws. In British Columbia this is called a bare land strata. We’re all bound by rules and regulations that relate to how our properties look.

Recently, our strata council resigned en masse. In the letter explaining their actions, they wrote that “there is a split within the community” and called the current situation “a toxic community environment.”

The professional property management company that the council had hired quit too. Their letter to us said, “we wish you the best of luck moving forward and healing the divisions in your community.”

As so many neighbour disputes do, this all started over a fence.  It’s gone way beyond that now. If the strata council hadn’t resigned, they might have been voted out. Special meetings have been called. Letters from opposing sides tell us about tribunals and Supreme Court.

I don’t know which side to support. I see merit in the arguments of both sides. And blame too.

But this toxic, fractured community is not the neighbourhood I know.

It has snowed, pretty much non-stop, for the better part of the last two days. A region where snow is a novelty has been hit very hard. Our roads remain unplowed. Our children and our dogs step outside and disappear into banks of powdery fluff. Our driveways require shovelling. Over and over and over again. I’ve done mine at least 8 times in less than 48 hours. Last night I was sorer than I have been in years. A 50 kilometer trail run hurt less than 50 centimeters of snow.

And it’s been glorious. We live across the street from a park. It’s been filled with kids. Constantly. Toboggans and crazy carpets and remote controlled ski-doos. The sounds of delighted children fill the air.

The park has been full of adults too. Parents revelling in two consecutive snow days. No work, some shovelling and much play. With their children, and their friends’ children and the children of people they don’t even know.

The sidewalks have been alive. With banter between friends and strangers. Commiserating about the non-stop shoveling. Sharing stories of blizzards long past. People slowing down, taking time to talk. To be in the moment. To share both the beauty of our snow-covered community and the frustrations of winter.

Everywhere I look I see neighbours helping one another. Stuck cars don’t remain stuck for long. An older woman falls. A younger woman rushes over. Sidewalks and public paths get shovelled. I just watched a man push his snow-blower up and down our street, clearing the road itself. In the absence of snowplows, he’s doing it himself. Doors get opened to share hot chocolate, and snacks, and some laughs.

Nothing is toxic. Nothing divisive. Entirely the opposite. A community coming together.

That’s exactly the kind of neighbourhood I want my daughter to grow up in. One where we can tie a rope to her old baby’s bathtub and pull her down the snowy streets, to play with her friends and rejoice in the glories of winter. A neighbourhood of nice homes, stunning scenery and wonderful people.

It doesn’t take much for a neighbourhood to become toxic. It started with a fence.

But maybe it doesn’t take much for that neighbourhood to heal either. Maybe all it takes is some snow. 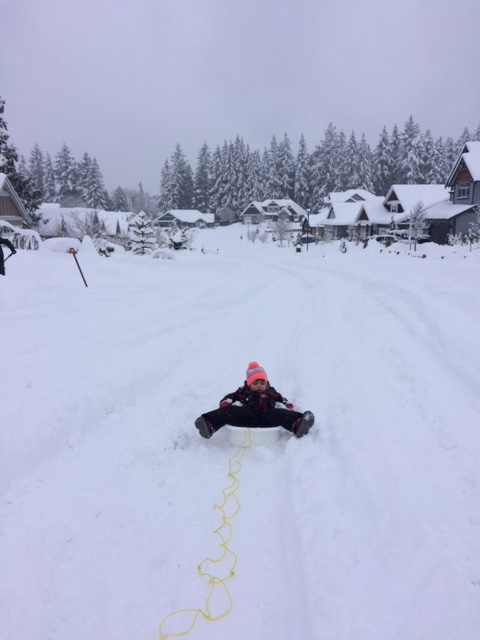