For much of my thirties I lived on a one hundred acre farm in Ontario. The property was magical. Endless fields, tracts of forest, a century old red barn, and the original brick farmhouse. Suburban development encroached all around, but this farm retained the beauty and charm of its origins.

I was a guest on that property because of the relationship I was in. We lived in a newer house which had been built to look old, fashioned out of reclaimed timber and recovered windows. This isn’t the place for the story of how I came to live there, why we left it, and the ultimate dissolution of that relationship. Only half of that story is mine to tell anyway.

But I lived on that property for a few years. I became a little part of it and it became a little part of me — my time there, a mere fraction of the years and memories of the family who owned it. A family that lived there for over fifty years, raised five children, rode horses, milked cows, skated on the pond, sewed crops, grew Christmas trees, and lived with the rhythms of the seasons.

That family moved away too. The timing theirs. The choice theirs. And the land changed. Development was unavoidable. The house where I once lived was demolished. Dozens of homes replaced it, packed cheek to jowl on the front lawn I once mowed, and the back lawn where my niece and nephew once played. The barn came down too. A structure that witnessed birth and death, hard labour and joyful play. An Ontario barn, an iconic building, synonymous with rural Ontario. A barn that is no more.

There’s a playground there now. Which is wonderful. Because hundreds of families can walk out their doors and be there within minutes. So it’s still a special place, just for different reasons.

The original farmhouse still stands, a designated heritage home now owned by a town that doesn’t seem to know what to do with it. So it sits abandoned. Boarded up. Surrounded by a fence.

I live on the other side of the country now. My trips to Ontario are infrequent. My time precious, maximizing every moment I can with family and friends. There’s little time for visiting places. So it was last October. My wife, my daughter and I were driving from the Toronto area to the Niagara Region. Our travels took us through the town I once lived. Although it was no longer a town. Many farms had been swallowed up. Many big box stores had moved in. It was now one of the fastest growing cities in the country.

We had no plans to stop. Until a full diaper intervened. And then we had to stop quickly. We were close to the old farm. Just minutes away. I knew there was a park there.   So we stopped. And changed a diaper. And walked around. And played. And I tried to remember where things were. Where exactly was the barn? The shed? The home I had once lived in? Landmarks like trees and berms had been knocked over by bulldozers. The land scraped flat.

The farmhouse was still there. We walked up to it. I remembered many things. Meals and people, many good times, and a few quite sad. Infinitely small memories in the history of that farm and that land.

I took pictures. Pictures I never thought I would take. Of my wife and my daughter on those grounds. My family – a family I didn’t know I would have when I lived on that farm. A family I could not have imagined. A mother and daughter playing in a park. A little girl prancing on a lawn. A beautiful autumn day.

Not long after we returned home, I lost the phone I’d used to take those pictures. I thought it fell down a storm sewer during a fierce storm, slipping out of my open jacket pocket while I bent over to put my daughter in her car seat. I had never downloaded those photos. I was sure they were gone forever.

A few weeks ago my wife found the phone. It was in our car all along. Jammed in the crevice of a seat.

I never imagined I’d see those photos again. I’m glad to have them back. 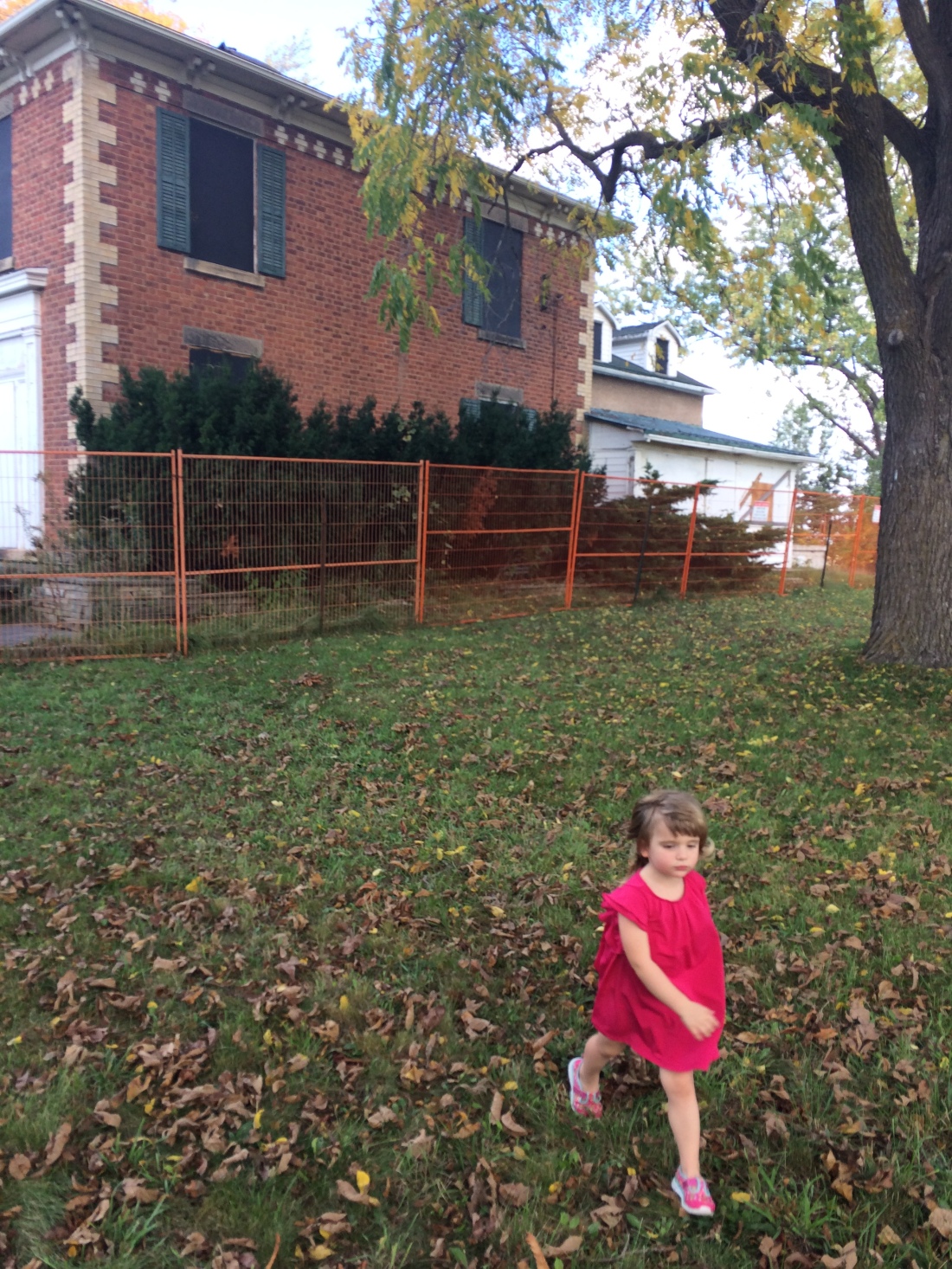